I've seen several schematics where the reverb footswitch is wired so it shorts the grid of the recovery tube (tank preamp) to ground. Is this an effective way to get this done? I assume the cable to the switch has to be well-shielded so it doesn't create hum when the reverb is on. Are there any other considerations for implementing this function?

My view on reverb is much easier. It's on all the time.. and lots of reverb, always. So I never make it switchable

Why not choose the even more satisfying option and build 2 of the same amp.. 1 with and 1 without reverb. Then just buy an ABY box...

0 x
"THIS should be played at high volume..preferably in a residential area"
Top

It's funny, I also basically leave reverb on all the time. But I did make a simple grounding switch to cancel it. Not because I want to turn it off, but because I wanted to make it switchable for the sake of making it switchable.
2 x
'I installed a skylight in my apartment yesterday... The people who live above me are furious.' - Steven Wright

Thanks guys, I'll hook this one up the same way and call it good.

Actually, I intended to work on the reverb today, but ended up rebuilding the effects driver (cathode follower) instead. When I went into the amp, I noticed the 6C4 cathode resistor was starting to discolor. That took me down a rabbit hole. The resistor was rated for 3W, which should have been more than enough, but it obviously needed something larger. Then I started thinking about how much power is being wasted with this tube just idling most of the time. That's when the trouble started. I spent several hours searching through tube manuals looking for a single triode in a 7-pin bottle with a mu and curves closer to something like a 12AY7. I wanted more current drive than a 12AX7 can provide, but not as much as the 6C4. After a couple hours, I gave up on triodes and started looking at pentodes. Many pentodes work well when they're wired in triode mode, so that opened the door a little wider. An hour later, I found the 6BH6. Same socket, same envelope size (my shield will fit) and the same filament requirements. I haven't calculated the exact mu in triode mode, but it has reasonable transconductance and operates at less than half the current needed by the 6C4. Its heater-cathode voltage rating is less than the 6C4, but I've elevated the heaters to +70V, so no problem there. After rewiring the socket and installing all new parts and values, it's much better. Voltage at the cathode is close to 1/2 the supply voltage, the stage draws less than half the current of the 6C4, and the cathode resistor runs lukewarm.

One more question on the reverb... What's the purpose of the RC network across the output? Does the tank produce high frequency artifacts? Or is this a noise filter or something else? (Schematic lifted from a Fender.) 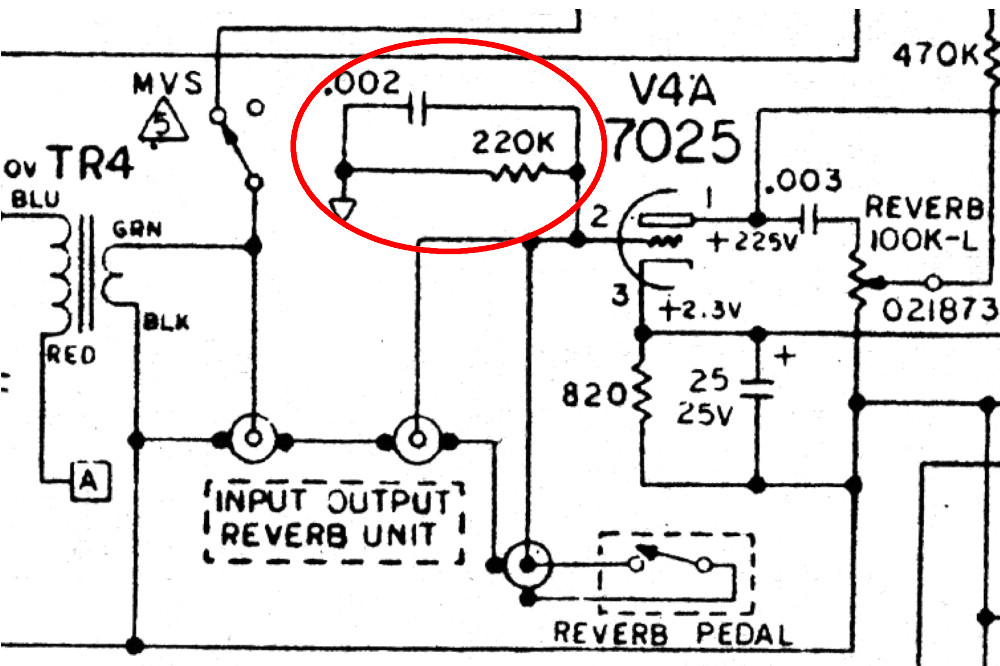 220K is too small for grid leak bias. Plus, the reverb tank essentially grounds the grid. I think it must have something to do with the frequency response of the tank. I might copy it, just to see if it makes a difference.

You're right, I must be tired -- that's a cathode biased tube. The 220k is the grid leak resistor though. Cap maybe adds stability?
0 x
Top

You can see my version of the single tube reverb circuit here: files/JMPGuitars_18_Watt_Tremolo_TMB_Re ... ematic.pdf

If you think your reverb is too bright with the cap, you can omit it, or try a different value.

Note: my circuit isn't wired opposite of that, it's written opposite. The schematic you posted shows in/out of the tank, mine shows in/out of the circuit, which connects to the tank.
0 x
'I installed a skylight in my apartment yesterday... The people who live above me are furious.' - Steven Wright

Can't be a bright cap. For one thing, in that position it rolls off the higher frequencies. It doesn't boost them. For another, .002uF is too small to have much effect on guitar frequencies at this operating impedance. I think it must be an RFI filter, intended to prevent rectification in the recovery tube in the presence of a strong RF field. There was a time when manufacturers paid attention to that sort of thing.

The 220K might be a failsafe to prevent hum in case the reverb cable comes loose. I'm just guessing though. It would be interesting to hear from the original Fender design engineer on this aspect of the circuit.

Speaking of the 220K, it's not a grid leak resistor. That term describes a resistor placed from grid to ground that's large enough to create grid leak bias. If the resistor doesn't do that, but is instead used solely to reference the grid to an external DC potential (ground or fixed bias), it's simply a grid resistor. The term "grid leak resistor" has been appropriated on the Internet in recent years by persons who don't appear to know the meaning of the term. I suspect that's because grid leak bias is so seldom seen now, or perhaps they're worried it will otherwise be confused with a grid stopper resistor. In any event, it's wrong, and whenever I see it, the misuse of the term always requires me to look up the value in the circuit being referenced to be sure it's not actually a grid leak resistor. Sorry, don't mean to sound like the jargon police. It's just one of those minor annoyances that get under my skin.

So the 3 types of resistor on a grid would be either
1) grid stopper -- used to block radio frequencies and prevent parasitic oscillation.
2) grid leak -- used for actual grid leak bias (with the K directly to ground)
3) grid resistor -- used ...for what again?
0 x
Top

The grid resistor usually references the grid to an external DC potential, typically either ground or a negative bias. However, even when its value is large enough to function as a grid leak resistor, referring to it simply as a grid resistor isn't wrong. It's when someone calls it a grid leak resistor, but the stage isn't grid leak biased, that the error occurs. It's much more common in music forums and related publications than elsewhere, but I don't know why. 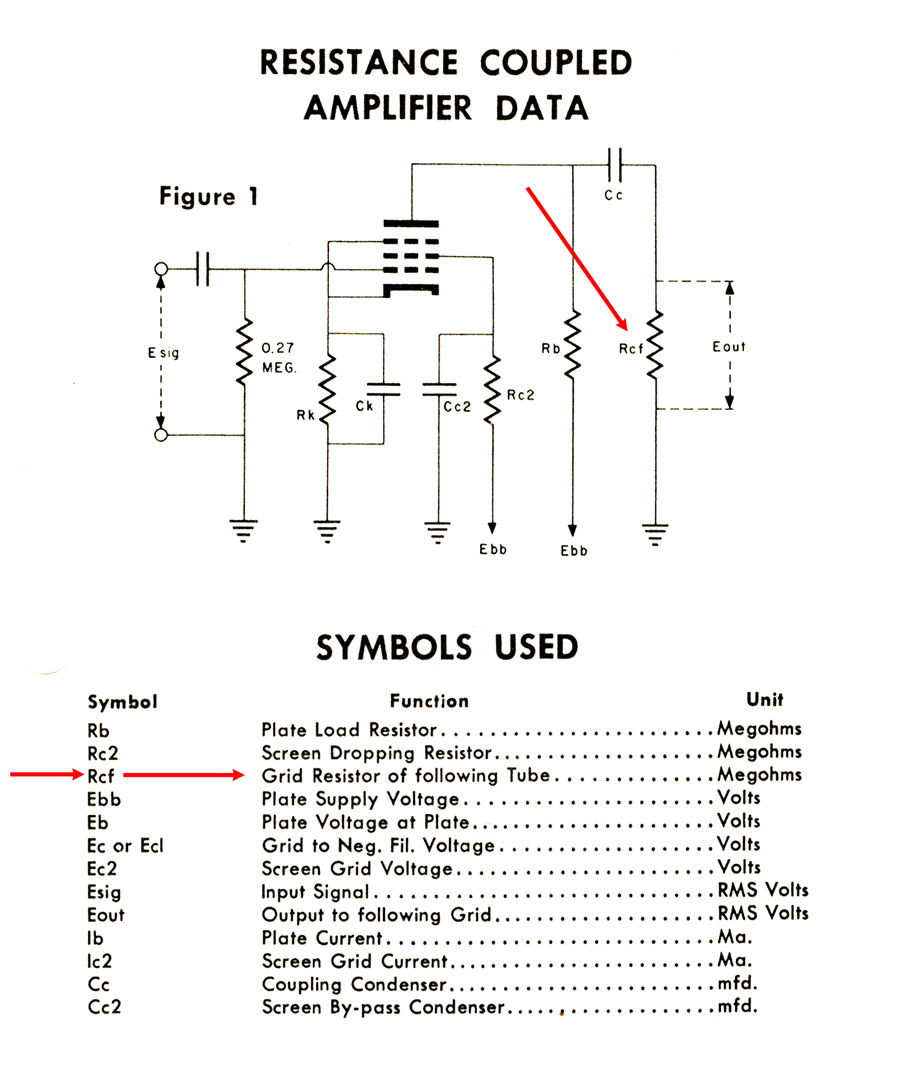 Return to “By the Bench”