hello this is my first post here, although ya'll have solved some of the questions that came up during the planning phase without even knowing it... search is a beautiful thing!
i have a hobby of picking up old organs off craigslist. mostly solid state, which for a guy who loves OLD (60s/70s) TO-3 transistor solid state has provided me with a ton of parts for repairs/future builds.
had a hammond 112 show up and i was actually willing to pay for this organ as i had heard that these old hammonds could make great guitar amps.
my normal style with diy effects is "borrowing" modules from various proven designs and hacking them together, so for this it's a take on the vox top boost gain stages but with a baxandall tone stack (didn't want the mid scoop the vox is capable of... and to me the baxandall is just the bees knees) and the power amp section of an orange ad15 (i dig the idea of phase inverter at full tilt and adjusting how much signal hits the power tubes). organ came with a saweet gibbs reverb tank so i knew i needed to use that. thankfully found a one tube reverb and was able to use the 12dw7 that was elsewhere in the organ
i tried to use as many recycled parts as possible. the power supply choke was originally on the input to the reverb of the organ, and a bunch of the killer wirewound resistors came from various organ stripping projects (all new capacitors, pots, and tube sockets though)
besides a couple minor boneheaded moves on the tone control (i initially neglected the coupling cap and had it going straight from the cathode to the resistor and pot... no wonder it was scratchy when i turned it!) i am calling this a success.
reverb is just there enough, not super splashy or surfy but i'm not after that kinda thing
i intended to have a standby switch but didn't have larger than 22k left in the bin in a 2w+ resistor so it's more like a low power mode (i think i got this from merlinb? resistor prior to first filter cap). probably a good thing since full bore it distorted the microphone on my spacephone 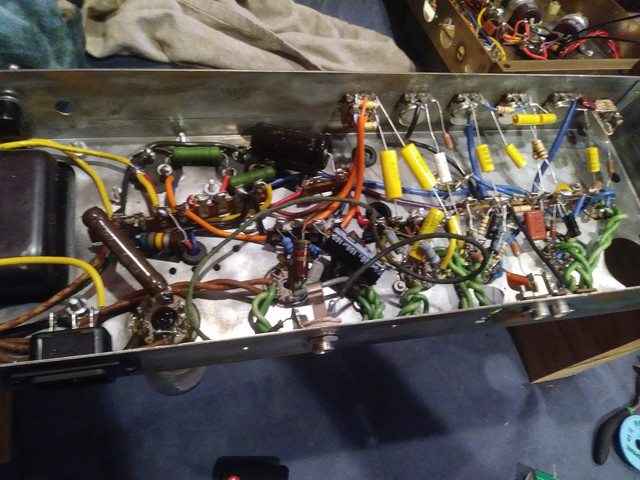 and schematic (redrawn, slightly less messy than what was in my notebook): 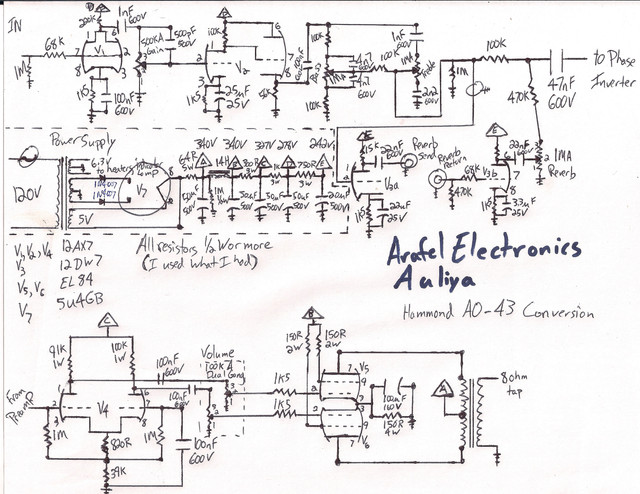 my next steps are constructing a box for it and having the old man cut a faceplate/rear plate out of aluminum on the cnc router
thanks again for all the help ya'll didn't even know you gave me!
1 x
Top

the rectifier to 64R to 50uF filter caps was taken from the original hammond schematic and checked via duncan's power supply designer... not arguing as i realize i am still learning so i am certainly open to correction!
using the tubes that came in the organ... hammond-branded but based on their 'made in' countries i'm guessing a mixture of old mullard/amperex/telefunken/rca or ge... certainly stouter than they make these days
anyway thanks for the response and thanks to the mods for moving this into the proper section
1 x
Top
Post Reply
3 posts • Page 1 of 1